Arguably the most hallowed of grounds for fans of Arthur Conan Doyle’s Sherlock Holmes stories is not in London, nor in any of the southern English towns in which the author lived. It is in the small, Swiss village of Meiringen. More accurately, it is a spot near the ledge of a viewing platform over the Reichenbach Falls. It was in this place, so we learn in The Final Problem, that the Great Detective Holmes apparently met his end at the hands of Professor Moriarty, the ‘Napoleon of Crime’, as both fell from the ledge into the watery abyss below.[1]

While reports of Holmes’s death were greatly exaggerated (he was, of course, resurrected almost a decade later in The Adventure of the Empty House[2]), the importance of Meiringen and the Reichenbach Falls in Sherlockian lore has not been. Fascinatingly, the place’s popularity came about not because but in spite of its connection with the author Doyle. 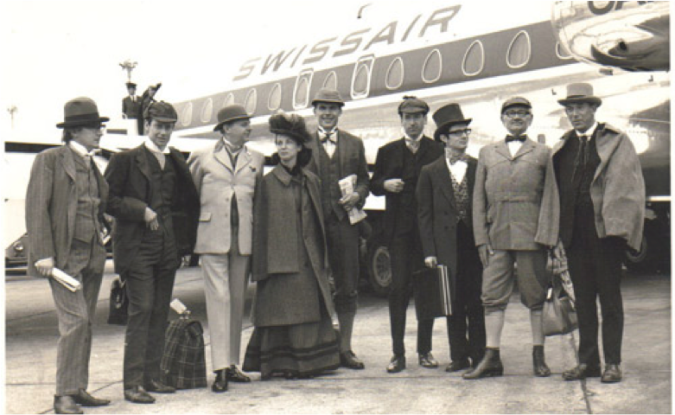 The first recorded ‘pilgrimage’ to the Reichenbach Falls, in 1968, was made by members of the Sherlock Holmes Society of London.[3] (Fig. 1) They trod a path already laid by one rather obsessed fan: Philip S. Hench (he claimed the ‘S’ stood for ‘Sherlock Holmes’). He and his wife visited the area around Meiringen each year throughout the 1950s, where Hench examined the area by the Falls, taking meticulous measurements and cross-referencing with Doyle’s stories. From this, he produced an enormous, pencil-sketch map of the Falls and surrounding area, annotated to mark the precise locations of events recounted in The Final Problem. (Fig, 2) Later, Hench agitated for a plaque to be placed at the spot he identified as that where Holmes and Moriarty struggled; the spot which became a later site of pilgrimage for fans.[4] (Fig. 3)

If Hench relied so heavily on the text of The Final Problem to interpret the geography of the Reichenbach Falls, why have I said that he and his fellow fans displaced Doyle? The answer lies in the long-standing fan tradition, led by the Baker Street Irregulars, the world’s oldest Sherlockian society, of ‘playing the game’. This involves approaching the Sherlock Holmes stories in the belief that Holmes was a real, Victorian man. Central to this game is the displacement of Doyle from his role as author and creator of Holmes and Watson. For how could Holmes have really lived if he was the literary creation of another man?

Yet, for Sherlockians, Doyle is never cast aside completely. Rather, he has been written into the world of Sherlock Holmes, as the character of ‘the literary agent’. In this telling, Doyle did not write the stories but rather helped to popularize Watson’s records of his and Holmes’s adventures. By allowing fact and fiction to support and deny each other at the same time, fans like Hench have been able to indulge in the idea that Holmes really lived whilst recognising that he exists between the pages of books – books which have Doyle’s name stamped all over them.

This double-displacement of Doyle, from his role as author and from his real-world identity, is most clearly seen in Sherlockian writings about Switzerland. Following in Hench’s footsteps, for instance, was Sherlockian fan and travel writer David Hammer. Exploring sites of Sherlockian significance in Europe for his travel book A Dangerous Game[5], Hammer, like Hench, drew on the events of The Final Problem and The Adventure of the Empty House, to shape his route. (A good, Sherlockian-produced illustration of this route can be seen in Julian Wolff’s map Operation Reichenbach, from 1948.[6]) (Fig. 4)

Fascinatingly, Hammer’s text bears only one mention of Doyle – in his displaced form as ‘the literary agent’, when he says on the first page, “there are those who claim they [the book’s locations] were visited not by Holmes but by his biographer or, God save the mark, by his literary agent”.[7]

Hammer displaces Doyle because he is playing the Sherlockian game. Yet, Hammer takes this game further than his predecessors. In his pilgrimage to Meiringen, stopping at various locations on the edges of Doyle’s text, like hotels at which Holmes and Watson might have stayed, Hammer helps to co-produce Holmes the character and his world; adding to the creative efforts of Doyle. With each step towards Switzerland, Hammer widens and deepens the reach of Sherlock Holmes in Europe, well beyond that imagined by Doyle, making Holmes walk in his footsteps. By the time Hammer reaches Meiringen there is little room for Doyle in his version of Sherlockian Europe – as there is no place for Doyle on Holmes’s hallowed ground.

[5] David Hammer, A Dangerous Game: Being a Travel Guide to the Europe of Sherlock Holmes, (Indianapolis: Gasogene Press, 1997)

One thought on “No Country for Dead Authors”